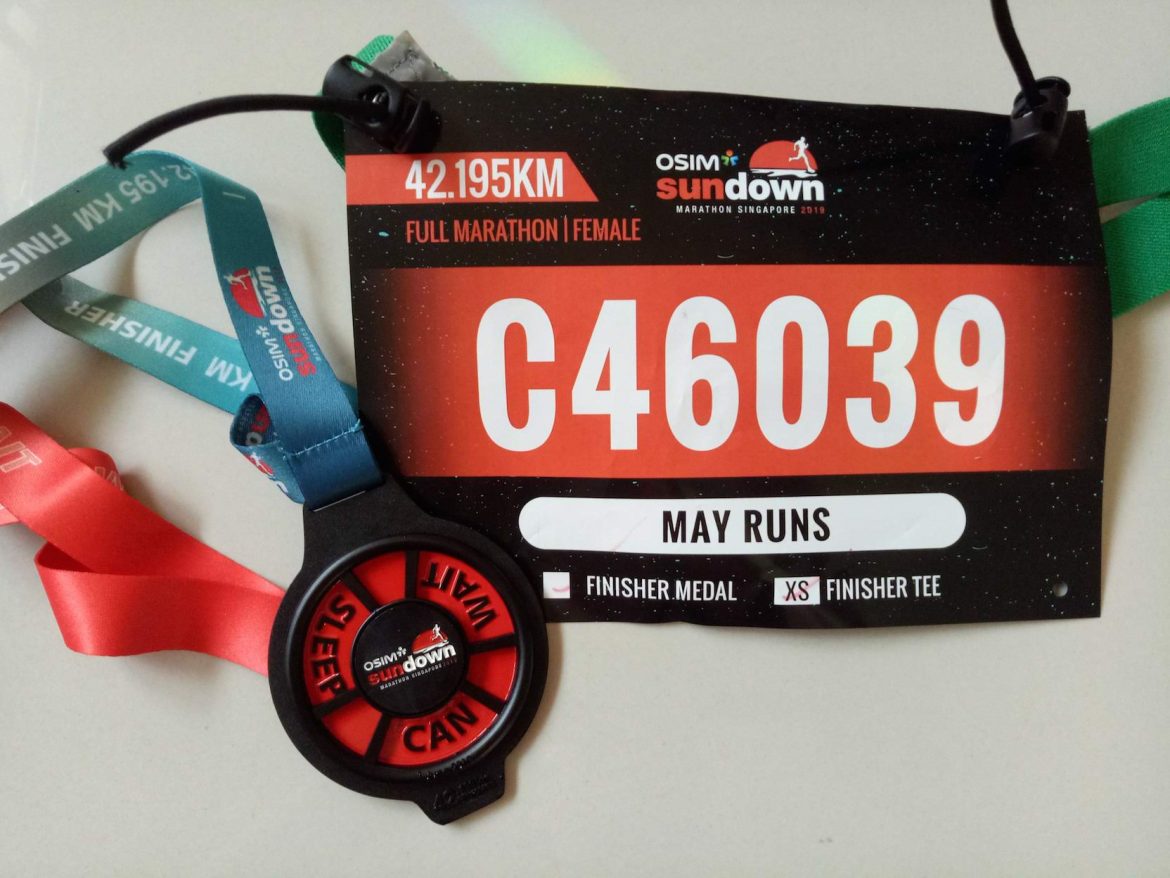 I decided to run Sundown Marathon again this year, as my training has been going on well. Since I was doing a 100-day running challenge, I thought why not hitch a ride on this since my fitness and endurance has improved. The 100-day challenge was not done because of this marathon, it was done purely for personal challenge and enjoyment. I only signed up for Sundown Marathon on the last day of registration.

I did not do any long runs except for one 21.1km shortly after I’ve completed the challenge. I was not very confident if I could run well and complete this marathon within a reasonable time. But I knew I could run a Personal Best since my previous 3 marathons were finished with disappointment (over 7 hours). I would be happy if I could do a sub-6, if not sub-7.

I was very nervous on the days leading to race day. 42.195KM is very long and anything can happen. I told myself to relax and don’t expect too much. As high expectation may often result in a huge disappointment if anything bad were to happen. But I still couldn’t stop the butterflies in my tummy.

on 1st June night, I went to look for Pen C when I reached the race village at around 10:30 pm. I spotted it easily and waited patiently for the pen to open. It was opened only at around 11 pm but race info said 10:45 pm. Flag-off was also delayed by almost 45 minutes (Pen C was flag-off at around 12:14 am) and it was quite frustrating to wait for so long.

After flag-off, I decided to run at an easy pace to avoid bonking later. The night was quite humid but still breezy. I drank some water at the first hydration station and carried on. I was surprised that the second station did not come into sight for a very long stretch, although I saw the notice “hydration station ahead”, but there was none. I was feeling fine and was not very thirsty, so it didn’t affect me much. Probably because my pace was in control, I wasn’t running very fast. I think the second station came after about another 4km of running.

I took 3 energy gels for the total duration at one-hour interval. I stopped taking it after the third hour because I was feeling good and tummy was quite full. The caffeine contains in the gel helped to perk me up as I was running like a zombie in a drowsy state. After the last gel was taken, I only drank Pocari Sweat/water at the hydration station to fuel. The drinking cups at most of the tables were still empty and not ready when runners arrived. The volunteers were still pouring drinks into the cups and it was very chaotic. They said, “please don’t push the table” and busy supplying drinks to those impatient runners. There were energy gels provided at one of the hydration stops. The brand is mule bar. I have never tried this brand before, I took one but didn’t eat it. There were bananas available too.

I was very surprised to see 5:30-hour Pacers with blue balloons ran past me at around the 23km mark and I decided to tag along and stick with them for as long as possible. It was the right decision and it made the entire long ECP journey not lonely at all with their loudspeaker music and cheers! At each hydration station, I had to grab the drink very fast, chugged it and ran in order to catch up with the Pacers. I also skipped some stations in order to keep up as I wasn’t very thirsty. I tried my best not to lose them, otherwise, I would have no motivators, alone and lonely running in the middle of the dark night. Their cheers and encouragement were so powerful, it kept me going.

After 30km, I normally “bang the wall”, but not this time! This time, I was running well and strong, there was no wall! I kept telling myself that if the Pacers could run non-stop, so could I! Soon after 36km, the boisterous wind almost blew us backwards! I had to hold tight to my visor to keep it. Rain soon followed and it was a nice shower opportunity. Running in the middle of the sleeping hour in the rain was the best. I love it! I believe everybody was awake by then.

After 40km, I realised I was running ahead of the Pacers. I could still hear their uplifting voices from behind. “1.6K more!…. Only 500 meters more!…. Don’t give up!… Keep going!…”. With their cheers, I was running strong but still couldn’t believe I could run at 5:30-hour marathon and tears flowed.

When I spotted the finishing arch, I ran even faster to cross it. I was ecstatic! My Garmin recorded 5:35. My official result is also 5:35. It was a huge PB for me (almost 2 hours faster than my old record).

I believe the Pacers were a little off-target. Maybe they were affected by the lack of hydration in the final few kilometres. I think many hydration stations ran out of the water (it didn’t affect me as I wasn’t thirsty). But that’s fine! They are still super awesome and I love them! They are very strong runners. Their positive energy and selfless contribution to the running community is admirable. THANK YOU! They are from the Running Department. Thumbs up!

After 3 disappointing marathons in the past, I swore not to run any more marathons and only stick to the half marathon. But soon I changed my mind and told myself not to give up easily without another fight. I am very happy at the result and glad that I did not give up. Consistent running is an effective way to improve. There’s no other way and definitely no short cuts. Running is life-changing. I cannot imagine my non-running life anymore. It is a lifetime sport and there’s no retirement in running. You just keep doing what you love and be grateful.